A deal signed in October 2020, saw Gaming Realms agree to a licensing arrangement with casino gaming monolith NetEnt.  Slingo Starburst is the first title created out of this deal and is available to play now. The game merges NetEnt’s iconic Starburst slot concept with Gaming Realms’ signature Slingo mechanic.

All the Slingo-powered games feature the ‘Win Spin’ bonus. This feature is triggered when three or more Slingos have been achieved, offering payouts as high as 1500x the bet.

NetEnt and Gaming Realms needed to impress with their first collaboration and, to this end, the game is a feature-packed extravaganza. The well-beloved Starburst is still recognisable, but a few surprising tweaks have been added.

Instant cash prizes are awarded by purple gem symbols when three or more appear on a single spin. The slot splits your base game up into 10-spin rounds where the 11th spin is an extra spin where you could win up to 5 free spins from a segmented bonus wheel. The green segments award free spins, while the red segments end the round.

This is a bingo/slot hybrid so when the numbers on the reels match those placed on the grid, you will ascend the bonus ladder to win amazing prizes.

Slingo Starburst was initially launched in New Jersey and is available to all online gaming platforms partnered with Gaming Realms. The Betsson Group will control the European distribution of the game and Entain Group will own the rights in the UK. Players in New Zealand will be able to access this innovative title at top casinos that accept players from the region.

Slingo Starburst has climbed the popularity charts rapidly since its release, entertaining players in the United States, Europe and the UK. Mark Segal, the Chief Financial Officer of Gaming Realms, expressed how delighted he is at the success of the game’s launch. 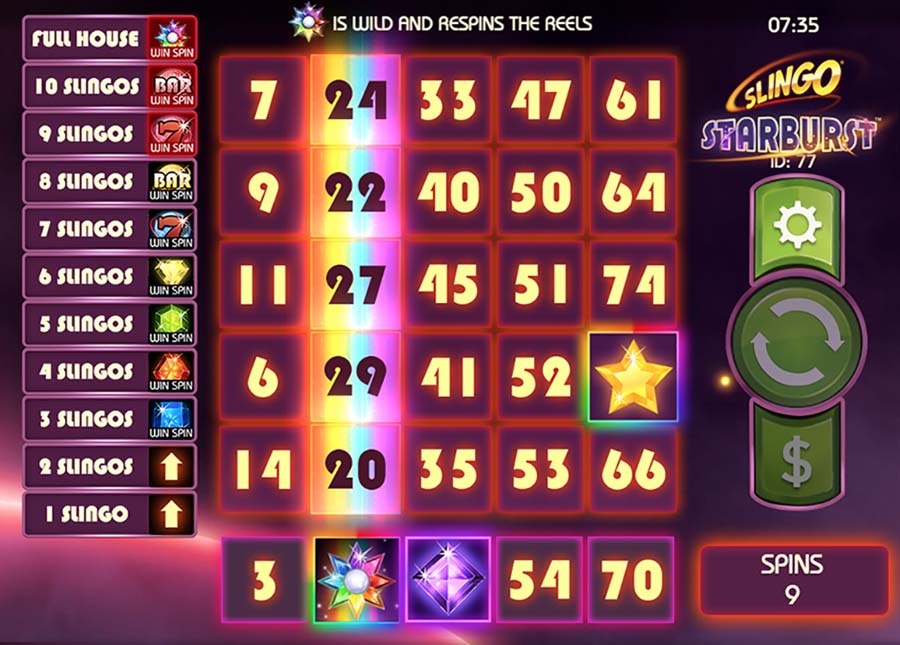