We read about them, we see them in the movies and on TV, we even follow them on social media. But for most of us, that’s as near as we get to being a celebrity, let alone having their spending power.

For the rest of us, we could only ever find ourselves in the world of private jets and superyachts, drinking vintage champagne like water and having priceless pieces of art on the walls, if we won the lottery or came into quite a remarkable amount of money.

So, to see just how the mega-rich spend their money and to put it into some context for the average New Zealander, we’ve taken a look at some of the most extravagant spending sprees and purchases that have been reported to date. Then we’ve looked at just how far from most people’s everyday experience they are, as well as how hard we’d have to work if we wanted to even get close to that kind of lifestyle.

The really big-ticket items that celebrities tend to buy fit quite neatly into five categories. So let’s take a look at each one in turn and see just where the big spenders’ cash has been going. We’ve converted all the amounts into New Zealand dollars, even though the original purchases were mainly made in GBP or US dollars.

When they do get out into the world, there’s no doubt that today’s celebrities like to do it in style. There’s no waiting around in airport lounges or in line at the departure gates to eventually be able to show their boarding passes. It’s private jets all the way and some, like John Travolta, even like to pilot the aircraft themselves. However, most tend to just satisfy themselves by owning the plane in question.

Before he took to Air Force One, President Trump spent a cool $156 million dollars on a Boeing 757 to fly him around, landing deals everywhere from Scotland to Moscow. As if this wasn’t indulgent enough, he also decided that it didn’t quite have the requisite amount of bling, so he even installed a gold-plated toilet in the already very lavishly-fitted-out aircraft.

Although it pales in comparison, the $56 million that Tom Cruise splashed out on a Gulfstream jet as a wedding present for Katie Holmes is still quite an impressive sign of his commitment – sadly not one that lasted. But one couple that’s still together made a similar gift to each other when Jay-Z and Beyoncé bought a private jet costing a cool $62.5 million.

And it’s not just up in the air that the golden couple have indulged themselves. In return for him putting a ring on it, Beyoncé also treated her husband to a top-of-the-range Bugatti Veyron Grand Sport, yours for a cool $3 million. It just goes to make the $692,000 that Diddy splashed out on the Phantom Drophead Coupe look positively restrained by comparison.

When you’re in the public eye, it’s important that you take care of your image and appearance. After all, the last thing you want to do is appear to be like a mere mortal. Your clothes must be couture, your complexion must glow, your hair must be perfect. In short, you have to appear as if you’re quite simply not of this world.

So, it’s no surprise that there are some pretty extravagant examples of how the celebrity elite make sure they stay on-trend, or preferably ahead of it, no matter the cost.

So let’s kick off with the boy wonder Justin Bieber. He’s said to spend nearly $1,200 per haircut to keep his locks in shape. It’s not known whether his barber gets a tip on top, but at 10% that would be a very handy bonus. An even more extravagant example of self-care comes from Jennifer Aniston who, it’s said, has a beauty routine that costs $12,500 a month and which includes a moisturizing cream that contains mineral crystals apparently obtained from the surface of Mars.

Turning to clothes, you’d expect Victoria Beckham to be quite lavish in her spending habits, and you’d be absolutely right. On one shopping spree in the international fashion capital of Milan in 2010, she was reported to have spent a quite staggering $1.8 million, although she did claim that not all of the clothes were just for her.

Our last example again comes from the high-spending Beyoncé, who once bought a $156,000 gold Balenciaga leggings and bra set – but then we are talking about a woman whose favourite tipple is Armand de Brignac champagne which retails at $430 a bottle.

For most of us, paying for our homes is probably the biggest single expenditure of our lives. And this is at least one thing that we have in common with most celebrities. For all the cars, clothes and other trappings of their success, it’s the property that they own that probably makes the biggest single dent in their finances.

Sometimes it’s not just property, it can even be whole islands. Of the many examples of this empire-building urge to own a whole, self-contained piece of land, two really stand out.

When Johnny Depp saw that Little Hall’s Pond Cay in the Bahamas was on the market for $5.6 million he snapped it up without a thought, not to mention considering the $1.5 million a year it would cost him for the upkeep of the 45-acre island. There was a similar story when Leonardo DiCaprio happened upon Blackadore Caye off Belize and paid $2.7 million for it with the intention of turning it into an eco-resort.

But this is nothing when compared to the $31 million that 9½ Weeks star, Kim Basinger, spent on Braselton, Georgia, again hoping to turn it into a tourist destination. Unfortunately, this venture failed and even led to her subsequent bankruptcy.

While they were married, Brad Pitt and Angelina Jolie were certainly not reticent about spending money on homes for their ever-expanding family. At one point, they owned both a $104 million French chateau and a $120 million home in Italy too, not to mention various other properties in the States and the UK.

Once you’ve bought that mega-million-dollar mansion, you’re left with the question of how to fill it with objects that either show off your extreme wealth, make your life more comfortable or, preferably, do both of these things.

One of the most obvious ways to achieve the former is to start putting together your own personal art collection – and there is no shortage of examples for this.

Starting with the Beckhams, their collection is said to be worth around $41 million and to be themed around love. Among the artists whose work they’re known to collect is Damien Hurst. They’ve even called up the services of the controversial artist to create a bespoke picture called Daddy’s Girl for their daughter, Harper.

Over in the US, film director and Star Wars creator, George Lucas, has one of the world’s largest private art collections. Featuring many paintings by Norman Rockwell, it’s said to be worth nearly $940 million, dwarfing the $15 million collection owned by Leonardo Di Caprio.

While there’s an element of egomania to being a celebrity, it doesn’t mean that they’re not prepared to share some of their massive wealth with loved ones of the human and animal variety.

So, let’s take a look at the indulged little ones to begin. First for an honourable mention is little Zachary, son of Elton John and David Furnish. They thought he needed some space of his own, so they treated him to his own Los Angeles apartment costing a cool $3 million. Extravagant yes, but for a couple who reportedly spent $454,000 on flowers over a 20-month period, it’s all relative.

Mariah Carey’s twin boys, Morocco and Monroe, also had plenty to look forward to for their first birthday when they received matching mini white pianos and toy Ferraris apiece. After all, it’s never too early to get them ready for the high life.

Another lucky tot is Beyoncé’s Blue Ivy, who started being showered with gifts even before she was born, including a Swarovski crystal-encrusted baby bath from Kelly Rowland – price tag $8,000 – as well as $1,500 Bugaboo stroller from Gwyneth Paltrow.

Moving on to pets, Mariah Carey shows almost as much love for her dogs as she does for her children by spending $73,000 a year on their grooming, and Paris Hilton famously spent $500,000 on a dog mansion, complete with TVs to entertain them.

But the record must surely go to Mike Tyson, who bought three rare Bengal tigers for $110,000 each and then had to spend $300,000 a year feeding them. It was only later that it was revealed that he didn’t have a license to keep dangerous animals, and they were sent to a far more suitable, if considerably less lavish, home. 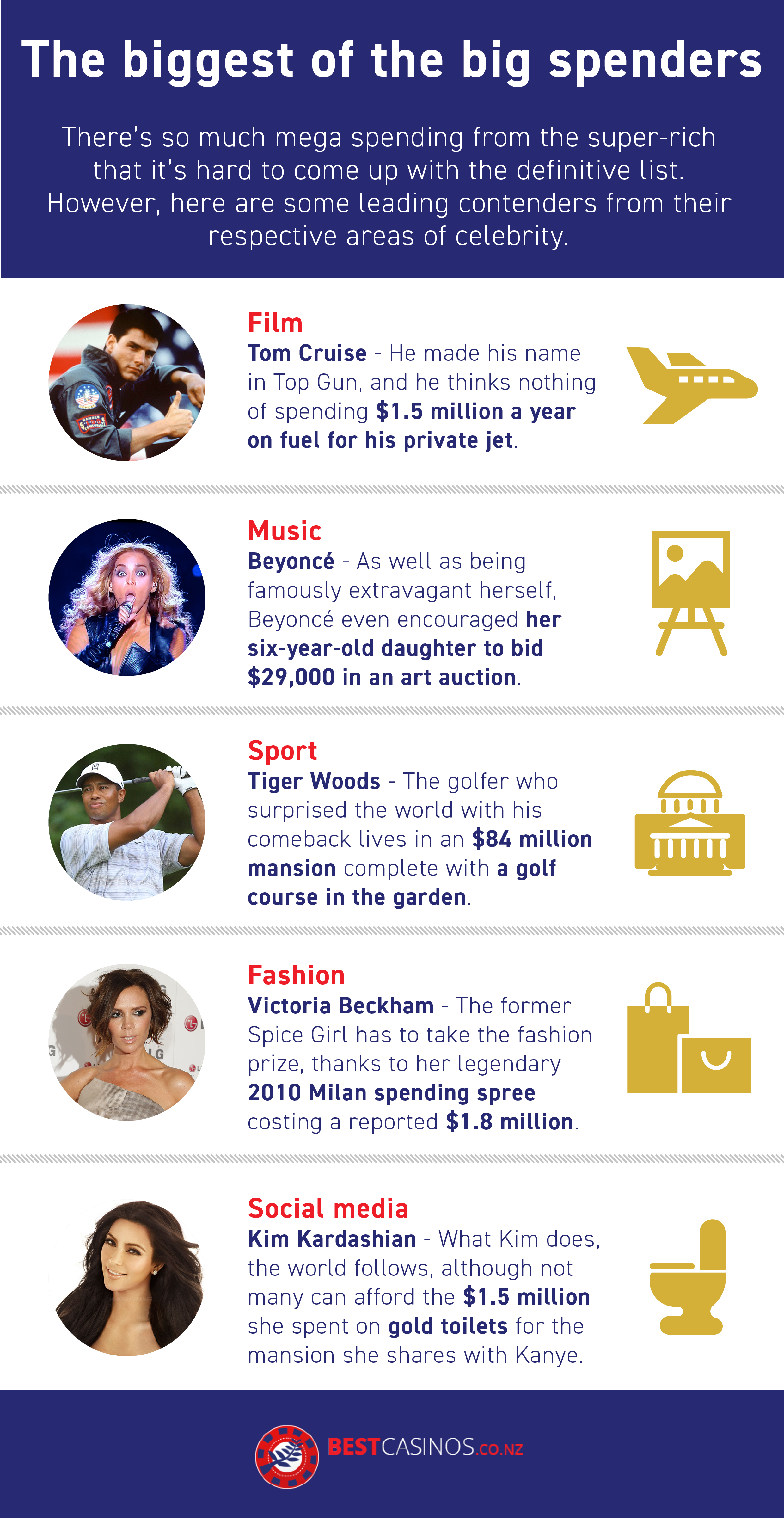